Most artists know it’s important to sign their artwork but often they are not sure where to sign or even how. Your signature is a written mark that represents you as a person. This unique way that you write your name is used not only as an identifier but as a security measure as well. In the art world, it’s part of the way that a piece of art is identified as belonging to a certain artist or even as real or a forgery. It’s important to consider, however, that the signature you would use for an official legal document is not necessarily the one you would want to use for signing your artwork and there are a few reasons for this.

LEGIBILITY
The signature that many people use for signing legal documents or cheque’s is often quite illegible. It often becomes a calligraphic or derivative version of actual letters. It’s part of the reason most forms will ask you to print your name as well as sign. While this may be great for trying to create a unique mark that no one can easily copy for security reasons, It’s not the best for signing your art.

If a piece of your artwork either got resold or passed down through a family where the official paperwork got lost from the piece, it might be hard to identify who created it just based on the signature. If you were fortunate enough to have reached a certain amount of fame during your career maybe this might not be an issue, but for the majority of working artists that won’t always be the case. An illegible signature leaves a lot of room for misidentification.

WHAT TO INCLUDE
If your last name is anything like mine you probably think that the last name alone should be sufficient as an identifier. My last name might not be super common in my home country of Canada but in Greece, it’s like the last name Smith. Signing my work with just my last name or even just “B. Sotiropoulos” might not be enough to differentiate or identify me. For this reason, it’s a good idea to sign with your first and last name if possible.

Some people also like to include the year as part of the signature. I think you can go either way on this. I like to sign the back of my pieces with a legible version of my name, the title of the piece, when the piece was created and mediums used. Some artists even go as far as adding a catalog number.

The reason this is a good practice is that the back of the piece is less likely to have any damage to it, especially if it is in a frame for a period of time. This also ensures that if the piece ever gets separated from any official paperwork it can still be identified as yours. You can do this by hand or even create a unique stamp that you fill out on the back of each piece for consistency. 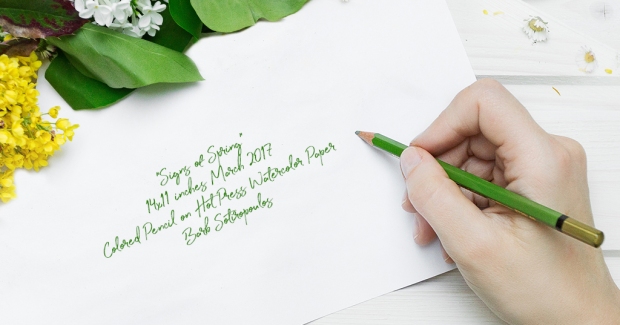 Some people like to create their own little logotype mark similar to what Albrecht Dürer used to do. While I love the aesthetics of this, again, if there isn’t some other way to identify your work like on the back, you’re assuming a lot that people are going to know it’s yours. Obviously, this isn’t as much of an issue if you are already well known or for people familiar with your work. But not many people can rely on that alone as a reliable identifier.

LOCATION, LOCATION, LOCATION
Another area artists struggle with is where to sign their work. The conventional place is usually the lower right-hand corner. Though perhaps the common practice, personally I don’t believe that’s the only best place for a signature. There are a couple things to consider here. If your artwork is going to be framed, you have to make sure you have signed far enough away from the edge that it won’t be covered fully or in part when a mat sits on top of the image. Paintings will have the same consideration for spacers and frames.

Many people like the lower right hand also because it acts almost like a period on a sentence. Typically our eyes scan left to right and top to bottom. So by that logic, you would arrive at a signature at the bottom right-hand corner towards the end of your experience looking at a piece of 2D Art. Similarly, if your eye is traveling in a circle throughout the piece, you would likely still arrive at that corner at the end of your journey. Most people have come to expect it there as well.

From a digital perspective,  if someone were to steal your art and try to pass it off as their’s, a simple slight crop inward would be all it would take to get rid of your signature. Now, in all fairness, you can’t make your decision solely based on worrying someone will steal your art but it is a reality. Anyone with decent Photoshop skills can remove your signature if they want anyway. 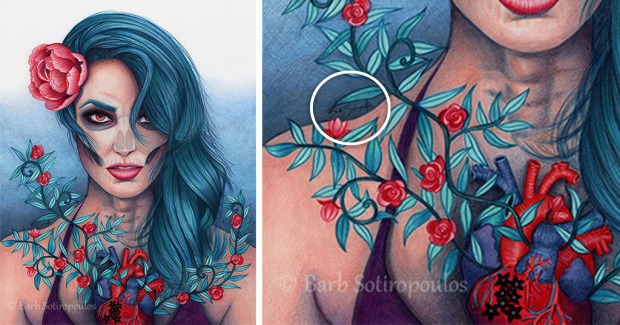 Since I tend to have pieces with white backgrounds, I like to tuck my signature near a part of the image where it’s visual but still works with the overall feel of the piece. If my image is stolen it requires more work to get rid of my signature instead of just a crop. I also use a small watermark on my images to add an extra layer of deterrence. I don’t love that it interferes with the overall look of piece but I also don’t want all of my hours of work to easily be passed off as someone else’s. At the end of the day, this doesn’t appear on the original anyway.

THE UNCONVENTIONAL OPTION
When I was in design school, the practice of signing my work got trained out of me. Designers and Illustrators don’t tend to sign their work since the end product is usually used for commercial reasons and isn’t necessarily meant to be a work of art attributed to a specific person. Eventually, I started to like my work without a signature even going as far as feeling like the balance of my piece was completely thrown off by one. In the case of pieces with a white background, I felt like it drew WAY too much attention to itself.

I often don’t sign my originals on the front and instead include all the information on the back. For digital posts, I will add a digital version of my signature to the piece. If the original sells, I will then go in a sign the front with the medium used in the piece and in a color that works in harmony with the rest of the piece as well as in a location that works with the composition.

Signing your artwork is an important practice for every artist. What your signature looks like is just as important as where you put it so take time to really consider what works best for you and your artwork. If you still aren’t sure, have a look at what other artists you admire are doing and decide if that is something that would work for your artwork too.

2 thoughts on “Signing Your Artwork the Right Way”

Stay Up To Date

Processing…
Success! You're on the list.
Whoops! There was an error and we couldn't process your subscription. Please reload the page and try again.

In this week’s episode of “Barb Bought a Product Because the Packaging Was Cool,” meet @ferriswheelpress writing inks!
I’m deep into commissioned art season so I won’t be posting as frequently right now but I wanted to share this peek of one I’m current working on. It’s always an honour and a pleasure to create artwork of other people’s furry loved ones. 🥰
I created these custom painted slip-ons for a very dear client and friend earlier this year for her wedding.
Well, my coloured pencil obsession reached a new level recently. I bought a set of pencil I have no intention of ever using just because the packaging is gorgeous! 😍
What’s your favourite love song?
Some people might not know this but I’m pretty low key obsessed with my puppy @camaro_theshiba ☺️ Yes..that’s right he has his own Instagram account, because I’m THAT dog mom 😂

All artwork subject to copyright. All rights reserved. ©Barb Sotiropoulos 2009 – 2021.