Hey Everyone,
The series is winding down and I’m happy to say that this piece is definitely one of my personal favorites. I also have some exciting news to share in regards to the series. As some of you know, I am the Q&A contributor at COLORED Pencil Magazine. For the December Issue, the Q& A focuses on my advice on how to create your own series and features a selection of my illustrations from this series! If you’d like to read my article you can purchase a digital or print copy of the magazine here.

This has been such a great adventure and I’m so happy to be able to share it with such a large and diverse international audience through the magazine. I love Canada and being Canadian and getting to share this series honestly means the world to me. 🙂

If this is the first post you are seeing in this series, you can read more about it in my previous posts here. Now on to the symbols represented and a few process shots.

SYMBOLS
The title of the piece is not the official motto as the Yukon doesn’t have one. It is, however, one that was voted upon by the Whitehorse Legion in a contest in 2016. The last report I read was that it was to be sent to Ottawa for approval but as of right now there is still no listed official motto for the territory.
Bird – Common Raven
A member of the crow family,  the raven is the largest with a body length of up to 70 cm. It was adopted as the official bird in 1985 and can be found everywhere in the region. Having a strong symbolic and mythological association the raven has been part of many First Nations stories that have been passed down through the generations.
Flower – Fireweed
This hardy plant grows from mid-July to September and is one of the most colorful plants that can be found in the Northern region of Canada. Chosen as the floral emblem in 1957, the fireweed is one of the first plants to bloom after a forest fire.
Tree –  Sub-alpine Fir
Adopted as the official tree in 2001, the sub-alpine fir is known for growing at higher elevations and its traditional medicinal properties. The tree can range from 6 to 20 meters high and its branches are strong and downward sloping to help it withstand a large amount of heavy snow.  Rich in Vitamin C, the sap and needles have been used by First Nations peoples for various cold and lung remedies. 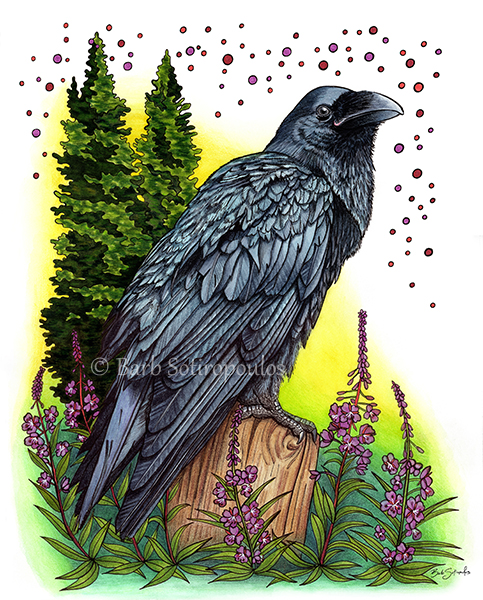 “Remembering Our Past, Embracing Our Future” 11×14 in Colored Pencil, Inktense and PITT Pens on Hot Press Watercolor Paper 2017.
All images copyright Barb Sotiropoulos. All Rights Reserved.

PROCESS
Although this piece ended up being more simplified in terms of composition. It felt like there was a lot of linework because of the detail in the raven. Birds, in general, have so many interesting rows of feathers and it was exciting to be able to show that in this piece.

One of the challenges, in creating a series where there has been a lot of vibrant colors, is making a piece with an entirely black bird still feel vibrant and cohesive. Much like with white subject matter, a black subject matter is often not just black. In the case of the raven, when the light hits its feathers a certain way there is usually a bluish or purple undertone.

For the purpose of this piece, it made sense to work backward and have my under layer color be that of my highlight color and then work in the darker tones. In painting, for example, you would often work the other way but for this medium that doesn’t really work. I used Derwent Inktense Deep Indigo for this piece to establish my blue base color. The final rendering of the raven brings a vibrancy in a bird that may have felt a little flat had I chose to render it in only black and grey.

This piece required a different strategy for the floral wreath component since much like Newfoundland and Labrador, the official flower’s shape is important to the characterization of it. I chose to bring in the colors represented in the flowers into the spherical whisps as well so that that color would be balanced throughout the piece.

With the overall piece having a lot of cool colors represented I chose to add a yellow sky background in reference to a rising sun. The Northern regions of Canada go through long periods of light in the summer months and darkness in the winter. To keep with a more uplifting feel of the territory my illustration is more representational of the Yukon in its summer months.

Only two more to go! Next up the Nunavut and finally a piece representing Canada as a whole!

Prints available in my Society6 shop!

All artwork subject to copyright. All rights reserved. ©Barb Sotiropoulos 2009 – 2020.