This year marks Canada’s 150th birthday and as an homage, I decided to create a series of illustrations based on the provincial and territorial symbols. The way that we represent ourselves, our land, our character and ideals through the meaning we assign to animals and nature is a truly fascinating thing. My search to learn more about the great country that I live in and to challenge myself creatively has been an extremely rewarding experience thus far. I’m learning why certain animals or plants were chosen to represent each province and territory and the historical significance that goes with that.

In this post, I’m going to share with you some of my processes and talk about the symbols that I chose to depict. I’m happy to share with you the first in the series based on the provincial symbols of Alberta, “Strong & Free.” 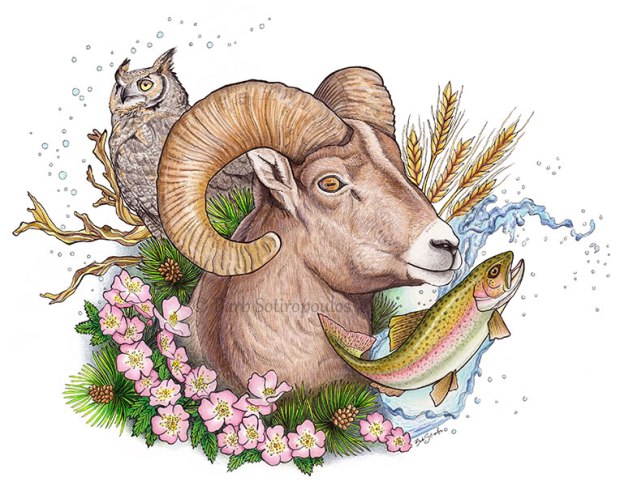 SYMBOLS
The title of the piece is a translation of the Latin Fortis et liber, which is the official motto of Alberta.
Animal – The Bighorn Sheep
The bighorn sheep is native to Alberta and was designated a provincial symbol in 1989. Though they are primarily found in the Rocky Mountain region today, prehistoric evidence shows large herds could be found across the province.
Bird – Great Horned Owl
Designated the official bird in 1977 through a provincial children’s vote, the great horned owl was also chosen to represent an increasing concern over threatened wildlife in Alberta and worldwide. The owl makes its home in the province all year round.
Flower – Wild Rose
Adopted in 1930 as the floral emblem of the province,  it is the most widely found native rose not just in Alberta, but across Canada as well. Its popularity comes from both the colour and fragrance. The berries produced from the flower are an important food source for birds in the winter.
Tree – Lodgepole Pine
Holding the official tree title since 1984, the lodgepole pine has had a significant historical role in the province that stretches back to the building of the railway to eastern Canada. Back then, the tree was used to make the railway ties for the tracks, though today it is most widely used for poles, pulp and other products within the forest industry.
Fish – Rainbow Trout
The official fish of the province of Alberta is actually the bull trout. I have chosen to depict the rainbow trout instead for artistic reasons because of its diverse colouring. They are the most sought after trout species in Alberta, though they are not truly native to the province.
Wheat
Though not listed as an official symbol of Alberta, wheat is a part of the strong agricultural heritage of the province and is symbolic of the Alberta Wheat Pool which also had a significant role within that history. It is also found in the coat and shield of arms in the provincial flag.

PROCESS
My Process for this piece involved researching what the provincial symbols for the province are and then choosing which ones would work well together in a composition. My plan has always been to intertwine these symbols together in my own interpretation of a sort of new version of a coat of arms. My next first step after choosing the elements was to draw out some thumbnail sketches to determine the general composition. From there I sourced images I could use to create my reference and assembled a loose version to base my drawing on.

After arriving at the final drawing in my sketch book. I transferred the drawing to the hot press watercolour paper with a light pad, using a waterproof ink pen. I had to be very careful at this stage because I didn’t want to make any mistakes. Wanting as clean of a transfer as possible, this meant no pencil lines, hence the direct inking.

Next, I did some tonal base layers with watercolor pencils and acrylic ink. I wanted to use dry coloured pencil for defining the details and textures later rather than to build up my tones. 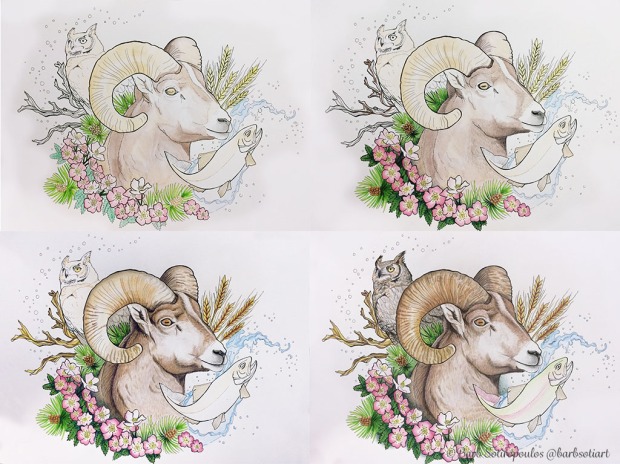 I hope you enjoyed seeing a little bit into my process on this piece. Next month’s illustration in the series is British Columbia. Follow me on Instagram or Facebook to see sneak peaks of the work in progress!

All artwork subject to copyright. All rights reserved. ©Barb Sotiropoulos 2009 – 2020.